Alert: Water Resources Get Major Attention in DC This Week!! 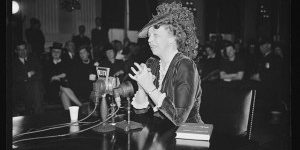 Image source:  The Library of Congress

The photo's a little fuzzy, but if you click on it you'll see clearly that it's Eleanor Roosevelt, the first presidential spouse to testify before Congress, in 1940.  Perhaps Melania Trump will show off her best fashion in a similar setting soon!

It's a big week on Capitol Hill and there's lots going on besides health insurance. Showing continued optimism in "regular order,"  the House subcommittee that oversees the Corps of Engineers and the Bureau of Reclamation [Readers:  What does BuRec do?  Hint:  If you're from the West, you ought to know] is holding a markup on Wednesday the 27th, from 11 am to noon Eastern.  A markup is a business session of any congressional committee where the members of the committee decide what goes into a bill.  This bill is the one that funds the Corps of Engineers and two other agencies for the fiscal year that begins this Oct. 1st.   You can watch it from the ease of your desk or beach chair by going here

Then, take a break for a long lunch and you'll be stoked for a 2:30 hearing of the Senate Subcommittee on Energy & Water Appropriations that you can easily watch here.  There are two Corps-related witnesses:  General Todd Semonite, the Chief of Engineers, and Doug Lamont, who is the principal career official in the Office of the Assistant Secretary of the Army for Civil Works (that position is still unfilled).  Both of these people are very well-qualified.  Nevertheless, as they testify, sing the Civil War-era song, "Vacant Chair", because there's a missing witness. There are a child-size handful of mid-level bureaucrats at the White House Office of Management and Budget who control just about every move the Corps of Engineers makes.  They never show up and, in fact, I doubt they have ever been invited.  .

This hearing is the first step in the Senate putting together its version of what you watched on the House side in the morning.   The markup of the Senate version will  come within a few weeks.

My next blog:  Secrets about the Corps Budget You Need to Know