Is the Planet Running out of Sand? 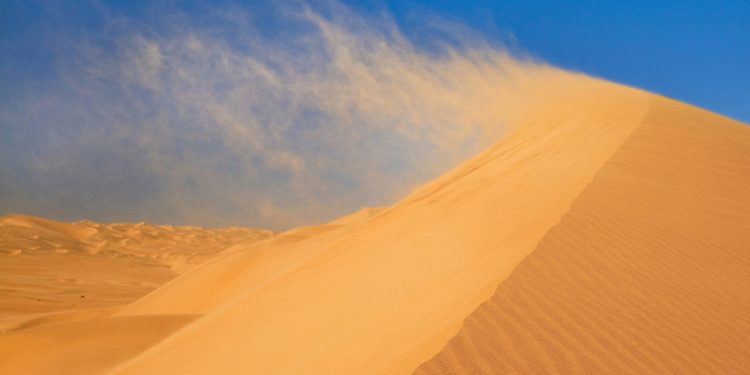 When you think of Earth's dwindling supply of natural resources, a few things immediately spring to mind.  Clean air and water top the list when it comes to what we want to preserve for future generations.  There is little disagreement that forests and endangered species of animals must be protected, and then of course there's sand... Wait, sand?  How is that one possible?  As peculiar as it might seem, humans are using so much sand that it could eventually lead to a global sand shortage impacting international trade, manufacturing rates, urban expansion, shoreline protection, and even increased violence courtesy of organized crime.  Two central matters of concern are whether the global demand for sand exceeds the current supply, and whether we are consuming sand at a faster rate than it can naturally replenish itself.

How could we possibly get to a point where we are using up all of Earth’s sand?  The major culprit is easy to posit but difficult to control, and that culprit is the galloping pace of global building and urban renewal in developed nations.  Sand is in fact the most used natural resource in the world after water and air, and along with gravel, it’s the primary natural resource used in construction supplies.  Sand is the key ingredient in concrete, asphalt, and glass, and a lot of it is needed to keep up with the accelerating level of urban expansion, specifically in Asia and North America.  In 2010, 11 billion tons of sand was mined solely for construction purposes.  According to an interview with Vince Beiser, author of an impending book about the sand trade, China has been leading the charge in these building rates, and in the last few years it alone has used more concrete in its urban expansion efforts than the United States used in the entire 20th Century.

North America, particularly the United States, is no slouch when it comes to building cities on top of cities, and U.S construction rates have increased 24% from 2011- 2016.  One only needs to take a weekend trip to New York, or any other urban behemoth, and then return a year later to find something almost unrecognizable due to the amount of newly installed high-rise office buildings and condos. The staggering fact, however, is that 70% of all globally mined sand is consumed in Asia.  Half of that is used in China alone. They have the West beat on this front, and it's not even close.

Ok, so that's easy enough to understand. Sand is used to construct buildings, and we're constructing more of those than ever before.  Where else is the sand going?  If you are reading this on your phone or computer, you’re doing so in large part thanks to sand, as it is a major ingredient used to create silica. Silica is found in electronics, and it goes without saying that humans are purchasing smart phones, computers and other similar technologies in mass quantities.  Sand is even a major component of the fracking business, with drillers pumping massive amounts of sand into their wells to amp up the pressure needed to crack open shale and get all the oil and gas they can.  Sand mines are currently popping up in abundance around West Texas so the supply of sand can be closer to the drillers and frackers, thus eliminating the cost of transporting the sand in from faraway places.

A looming sand shortage has severe implications for coastal resilience.  To start with, overdevelopment of shorelines and an uptick in coastal population restricts the amount of available sand.  Beaches and other natural features are the most effective line of defense against hurricanes and sea level rise, but as sand continues to be expunged by both man-made and natural forces, we leave ourselves ever more vulnerable to the ravages of water.  For instance, the USGS has presented evidence that sand removal increased the devastation caused by the 2004 Indian Ocean tsunami.  Without adequate supplies of sand, it’s harder for coasts to absorb the impact of storms, and thanks to climate change and the related rise of the seas, the situation is only going to become more acute.  As sea levels rise, rates of shore erosion go up, and more sand will need to be taken from other sources to replace that which has been washed away.  Most urgently in the United States, offshore borrow sites, particularly near the East and Gulf coasts, are running low in supply of accessible and compatible sand to dredge.  Miami Beach, which consistently spends millions of dollars on renourishments to preserve the influx of tourist money and to protect the flood-prone city from the rising ocean, has exhausted its borrow sites and been forced to look elsewhere for sand.  They have turned to counties north of Palm Beach, but have been met with fierce resistance from local officials there who want to save cherished sand for their own shore protection.  An alternative borrow site for Miami Beach is the Bahamas, which has the ideal type of sand for beachgoers, but federal purchase of foreign sand is currently banned if sand is still available in the U.S.  WRDA 2016 authorized the Army Corps to study bringing in sand from foreign sources, but an immediate fix is not readily available, and while this study has been authorized, it has not been funded.  In the greater Caribbean, massive amounts of sand have already been taken from beaches, so it remains to be seen if local governments will be eager to relinquish more and open themselves further to storm related risks.  As time goes on, more sand will likely be taken from sites beyond the borders of state waters, particularly the Outer Continental Shelf.  Taking sand from the OCS is expensive, tedious, and heavily regulated given the various environmental protections in these areas.  Of the utmost importance is a regional approach to the study of borrow sites closer to shore, so desirable and scientifically compatible sand can be identified and utilized.  All of this takes time of course, and progress toward the exploration of alternative borrow sites is incremental at best.

Ok, it can't be as bad as it seems!  I mean, look at those vast deserts in Africa and the Middle East.  Just take that sand because, I've seen Lawrence of Arabia and those shots of the desert seem to stretch on forever.  Problem solved.  Not exactly, because much of that plentiful desert sand is too fine in grain quality to make effective construction material.  Alright then, let's just take a bunch of rocks (I know we can't be running out of those too) and crush them up to make new sand.  This sounds semi- plausible but then you run into the problem of creating sand that is lower in quality and less useful to builders than that which occurs naturally.  Taking the extra steps to crush up all those rocks and then transport them will be incredibly expensive to boot.  Also, crushed up rock does not produce recreational sand that is pleasing to the eye and touch of beachgoers.  Destinations like Miami Beach need the good stuff if they want people to keep paying money to visit.  Recycling sand is a good option for construction purposes, but once turned into concrete, that becomes increasingly difficult and costly as well.

According to a recent summary by Science Magazine, the central problem is that there has yet to be a globally comprehensive systematic study of sand demand versus sand supply. There are many unknowns at this point, but we can already look to the example of Vietnam where the government says it could run out of construction sand by 2020.  The international community is starting to consider whether we should begin treating sand as a resource in the same league as water and air. Some countries have implemented bans on the unfettered acquisition of sand and imposed stricter regulations on sand use and mining. California, for example, used to be home to numerous sand mines, but once damage to nearby beaches became apparent, the number has dwindled to one.  On the other side of the world, in Asia, many countries have begun to tighten regulations on sand exports, and keep detailed accounts of how much national sand they are consuming and selling.  More efficient tracking of sand consumption on a country by country basis is vital to get an accurate assessment of how grave a sand shortage the planet might face. This task is made maddeningly more difficult by the emergence of none other than the illicit sand trade.  Yes, you read that correctly.  The illegal mining of sand by organized crime groups has become especially prevalent in India, but also in China, Kenya, Indonesia, Vietnam and Morocco as well.  Some government records of sand use are nowhere close to accurate because modern day Don Corleones are buying off cops and other government officials, then illegally hauling off sand by the truckful.  The illegal sand trade means big bucks for those involved ($2.3 billion in India alone), and it’s escalated to the point where groups are brutally murdering their competition and any innocents who get in their way.

I bet you had no idea that a sand shortage could be so dramatic.  It is time for a systematic examination of where sand is being mined and where it is being used.  Increased regulation of sand supply is needed, but we have seen how that is difficult when many officials are clueless as to how much is being used, sold, or stolen from right under their noses.  More effective law enforcement would be invaluable in addressing this problem, but that is easier said than done.  Eventually, as the price of sand goes up builders will have to start looking to other resources such as wood to make their construction materials.  The global consumption of sand can be slowed considerably if we look to alternative building materials.  Europe has taken impressive steps to use more recycled materials in their construction projects, and all regions would be wise to examine the viability of this. Government mandated recycling policies for the construction trades could lead to greater sustainability, and more effective planning must occur to ensure that we use valuable sediment in the most efficient way possible and minimize waste.  The issue of sand wastage could fill volumes, and will be the topic of a subsequent post on this blog.  International policies and cooperation regarding the regulation of sand mining and appropriations could very well be the most important step, but it’s a long road getting there. The hard facts show that we are already seeing the economic and ecological impacts of the regional stripping of sand, especially as it relates to the coasts.  We now must face those facts and engage in a broader and more meaningful global collaboration to ensure that we preserve not only our sand reserves but all other natural resources that we value on this terrestrial sphere.